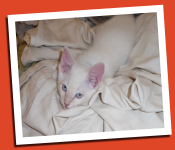 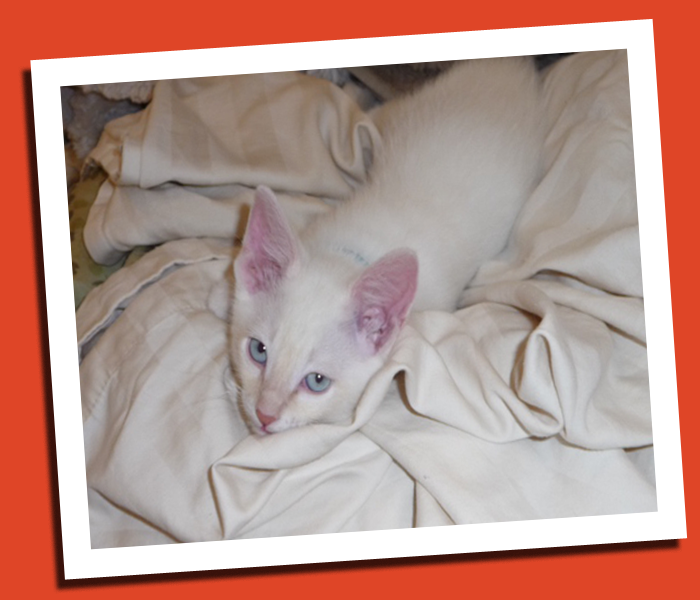 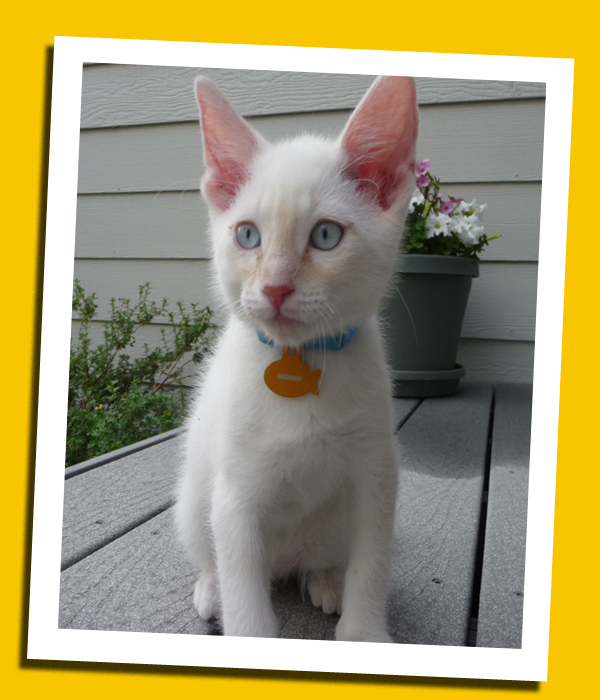 He was diagnosed with Cerebellar Hypoplasia (CH) at 4 weeks of age and consequently has poor coordination and head tremors. My husband and I immediately fell in love with this special little guy and decided to give him a place to call home. We are so blessed to have him in our lives, as he has taught us somuch. He does not let his disability get in the way of having a happy life. He loves playing with our eighty pound dog and chasing our two cats. He can eat, drink and go to the bathroom on his own. CH cats and other special needs animals can lead very normal long lives and can provide their owners with so much happiness. If you are looking to adopt, please consider a special needs animal to join your family.
– Brennen’s Adoptive Family

Kittens are born affected with cerebellar hypoplasia or CH. It may take a few weeks until the kitten begins to explore and scuttle around to notice that something could be wrong with coordination and motor skill movements. While the kittens are developing they may look like a “bobble head”, walk with a wide stance to compensate for feeling off balance and then later may walk upright but with a lean or against walls. The most noticeable time is when the kitten is intending to do something like eat, drink, focus on and play with a toy- that is why the tremors are called intention tremors. Despite these obvious motor skill deficits, CH cats are happy cats, able to eat and drink and use the litter box as any non-CH cat would.

The root of Cerebellar Hypoplasia

The cerebellum is not part of the brain, rather just behind the brain, but still is a part of the central nervous system. The cerebellum helps to control movements and actions that are involuntary, such as reaching for something, turning or simply walking. Although these may seems like voluntary things that we “choose” to do, there is an involuntary portion of the movement that our body, via the cerebellum, knows to do.

You can think of your cerebellum as a sort of level that tells your body if it is up or down, left or right, sideways or straight in relation to each direction. It uses this information to then help your body to determine to walk on uneven ground, to move left to avoid an object at the right or even walk and chew gum at the same time!

Your Cat’s Cerebellum and the effect of Feline Distemper Virus

Much like many other portions of the brain and nervous system, the cerebellum is very intricate and therefore takes the entire time a kitten is developing during pregnancy to develop. Because of this, there is a longer time that damage may be done to the cerebellum in the developmental stages. Because the Feline Distemper Virus can move from the pregnant mother cat into each fetus, it destroys small nerves in the developing kitten fetus and eventually when born, the kitten’s cerebellum will have a tiny improperly developed cerebellum. Improper development, or under developed, is also called hypoplasia. The pregnant mother cat can either transfer the virus because she was infected with Feline Distemper Virus via the environment or another cat or it can be as a result of vaccinating a pregnant cat with a modified live distemper vaccine, the most basic of all cat vaccines.

Diagnosing this condition is usually quite obvious given the symptoms. A more exact diagnosis could be done with and MRI or CT scan to confirm the underdeveloped cerebellum.

The below listed can also help to diagnose CH as the kitten ages:

There is no treatment for the damage that is already formed in a cat with CH. There are varying levels of the disorder where some kittens will be more or less affected. Owning and caring for a cat means understanding the challenges and compensating for them. Examples are to provide a food and water source that is easy to get to, but not easily spilled, being sure that litter box is easily accessible. Kittens and cats with CH can usually do everything  non-CH cat can do, they just look a little different doing it and may take a few seconds longer. CH cats should be indoor cats only as we would never want their condition to allow them to be put in harm’s way. Almost all CH cats have good quality of life and what they may be lacking in motor skills they will likely make up in personality.

This disease or condition is very easily prevented by making sure that female cats are vaccinated against feline distemper and also not vaccinating female cats while they are pregnant. This means that simple and regular vaccinations will prevent cerebellar hypoplasia in kittens. 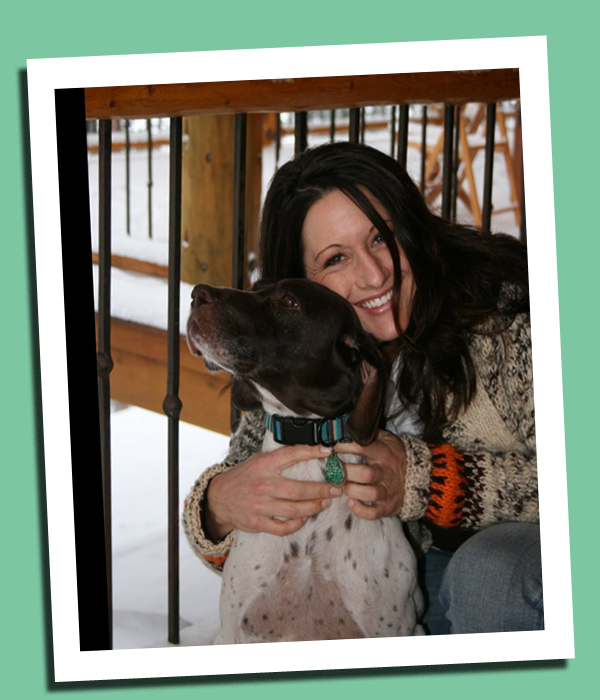 Dr. Hays was born and raised in Idaho, and came to Colorado for a change of pace and to finish undergraduate school in 1996.  She received her BS in Biology from University of Colorado-Denver.  While working at a small veterinary clinic as a kennel technician, she realized that veterinary medicine was truly the direction in which she was headed.  Dr. Hays went on to earn her Doctor of Veterinary Medicine degree from St. George’s University School of Veterinary Medicine in Grenada, West Indies (in the southern Caribbean), where she lived and studied for three years. She completed her clinical year of school in 2007 at Washington State University’s College ofVeterinary Medicine.  Dr. Hays has worked in general and preventative medicine, rescue/shelter medicine, surgery and spay/neuter surgery.c 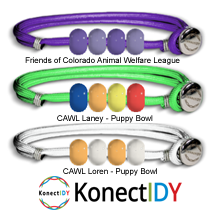